Thank you for your patience while we retrieve your images.

The history of Eisenach is linked with the Wartburg castle, which was built according to legend in 1067. There were at least three settlements below the castle, that merged to a common city in the second half of the 12th century. This town, Eisenach, was first mentioned in 1180.
Several now legendary events took place on the Wartburg in the following decades, best known is the "Singers' Contest on the Wartburg" (Sängerkrieg, which is part of the Tannhäuser legend).
After the Thuringian War of Succession (1247-1264) Eisenach became subject to the Wettin dynasty of Meissen. Later several mini states were established in what is now Thuringia, and Eisenach became a principality on its own in 1521. In 1751 Eisenach lost its independency and became part of the duchy of Saxony-Weimar.
Eisenach was the place where Martin Luther lived as a child, although he was not born there, and later for his receiving protection by Frederick the Wise after having been pursued for his religious views. It was while he was staying at Wartburg Castle that he translated the New Testament into German.
The town is famous as the birthplace of Johann Sebastian Bach as well.
(Source: Wikipedia) 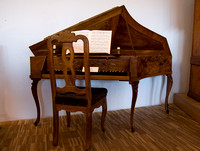